OBAMA BUSTED in MAJOR LIE! Time To ROT IN HELL

In a desperate attempt for a failed man-child to remain relevant, Once again Former President Barack Hussein Obama has proven who he really is.

This time it was his Christmas greeting that has people up in arms.

The Obama’s are such good Christians that they used the same picture for their 2015 greeting as he did for their 2017 Christmas message. 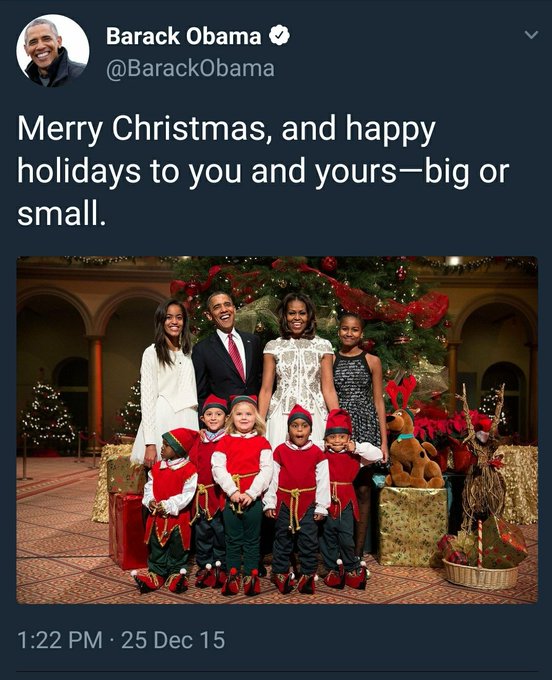 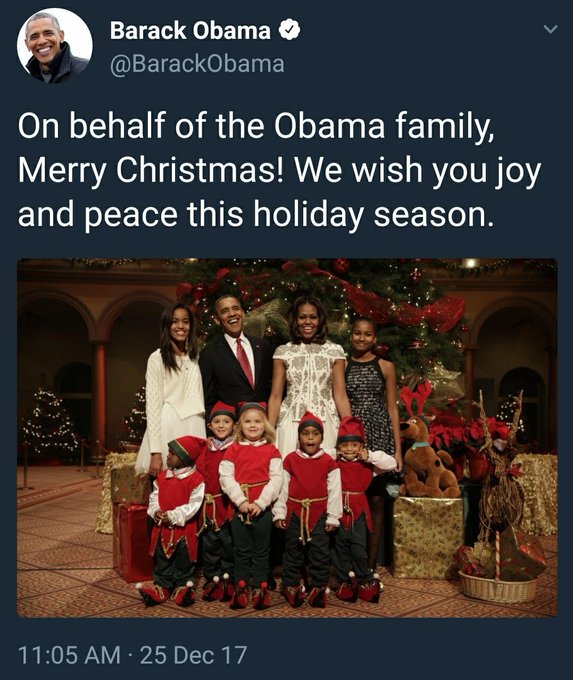 Imagine hating Christmas so much that you use the same picture, in 2015 and 2017?#TuesdayThoughts

If you compare the photos they are both the same, These heathens weren’t even able to get together as a family to take a decent picture to celebrate the Christmas season. But then again what can we expect from a US President who says we are a Muslim Nation, something that couldn’t be further from the truth.

Obama seems significantly more comfortable with this characterization of the historic role of Islam than he is with the non-fictional actual historic role of Christianity and Judaism in the American founding.

After all, this is the same man who stated in 2006, “Whatever we once were, we are no longer a Christian nation – at least, not just. We are also a Jewish nation, a Muslim nation, a Buddhist nation, and a Hindu nation, and a nation of nonbelievers.”

It is fair to say that modern Turkey was not founded upon the same principles as the United States. It is also fair to say that Islam has not been woven into the fabric of our country since its founding, at least not in any meaningful sense.

That does not mean that there were no Muslims in America at the founding — many African slaves were originally Muslim, and were forcibly converted from that faith. But to say that Islam as a religion has been “woven into the fabric of our country since our founding” is simply false. The first wave of Muslim immigrants to the United States did not begin until well after the Civil War. The first mosque in the United States was not built until 1915, by most reports.

Islam had zero impact on the founders or their philosophy – less than zero, given that the founders despised the religion, or what they knew of it. President Obama fictionalized this history at an Iftar dinner in 2012:

As I’ve noted before, Thomas Jefferson once held a sunset dinner here with an envoy from Tunisia — perhaps the first Iftar at the White House, more than 200 years ago. And some of you, as you arrived tonight, may have seen our special display, courtesy of our friends at the Library of Congress — the Koran that belonged to Thomas Jefferson. And that’s a reminder, along with the generations of patriotic Muslims in America, that Islam — like so many faiths — is part of our national story.

Well, not so much. That magical “first Iftar” was a meeting between Sidi Solima Mellimelli, an emissary of the brutal Barbary pirates, and the president. Jefferson had over Mellimelli in an attempt to bribe him into submission after the USS Constitution captured ships from the bey of Tunis. Mellimelli requested food, lodgings, and concubines.

Jefferson already knew of Islam, having been educated in 1786 after Barbary pirates attempted to blackmail America into monetary tribute. At that time, the Barbary emissary justified piracy with reference to the Koran, according to a report from Jefferson:

The Ambassador answered us that it was founded on the Laws of the Prophet, that it was written in their Koran, that all nations who should not have acknowledged their authority were sinners, that it was their right and duty to make war upon them wherever they could be found, and to make slaves of all they could take as prisoners.

The precept of the Koran is perpetual war against all who deny that Mahomet is the prophet of God. The vanquished may purchase their lives, by the payment of tribute; the victorious may be appeased by a false and delusive promise of peace; and the faithful follower of the prophet may submit to the imperious necessities of defeat: but the command to propagate the Moslem creed by the sword is always obligatory, when it can be made effective. The commands of the prophet may be performed alike, by fraud, or by force.

Quincy Adams would later lament, “Such is the spirit, which governs the hearts of men, to whom treachery and violence are taught as principles of religion.”

As Thomas S. Kidd writes, philosophers upon whom the founders relied had similarly negative views of Islam. Montesquieu wrote that the Turks were despotic. William Blackstone wrote that religion could be used for despotism, as shown by “terrible ravages committed by the Saracens in the east, to propagate the religion of Mahomet.” Thomas Paine wrote of Islam in Common Sense, but only as a reference point for despotic attempts to stifle liberty: he said that divine right of kings was a “superstitious tale, conveniently timed, Mahomet like, to cram hereditary right down the throats of the vulgar.”

The historical record demonstrates that Islam had virtually no role in the foundation of the early Republic outside of being used as a negative comparison point for freedom and self-government.

President Obama is obviously rewriting history. But since he’s busily rewriting the present, too, why should anyone be surprised?

We are all aware that Barry Soetoro and his wife never liked Christmas much, after all, he did spend 20 years at Reverend Wright’s Church and then claimed he never heard all the anti-American garbage he would spew every Sunday.

Every time I just think of the fact this man was elected to be President of the United States of American. Not only once, but twice. I still can’t believe it. How was he able to get so many people to fall for his lies and false narratives is something I will never be able to understand. Even to this day, there are people around who still miss him and actually wish he could have had a 3rd term, while at the same time promulgate the lie that his administration was scandal-free. It was scandal-free only because the mainstream media would cover for him.

This all plays into the fact that 1 in 4 Americans suffers from a mental health disorder.