An active shooter has been reported at Texas Tech University and is still ‘at large’. The campus is currently on lockdown and students are being urged to take shelter.

We will post updates here as they come to us. Be sure to share this to make those that may be in the area aware. 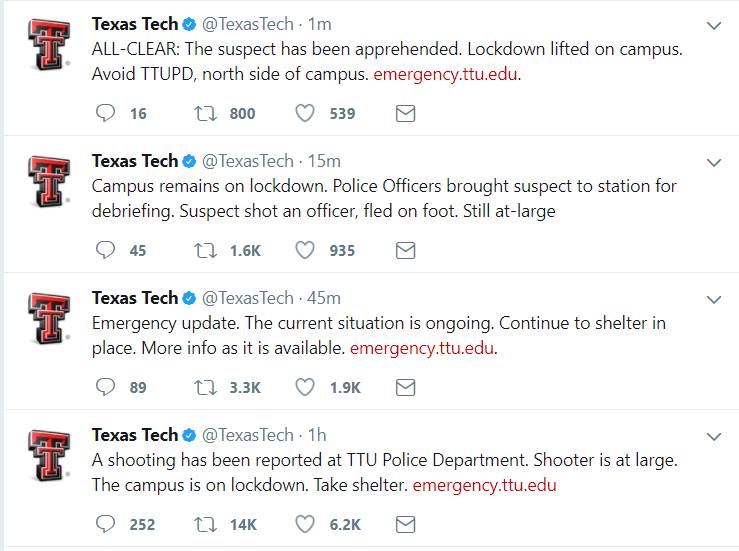 The shooting unfolded at the university’s police department, the officials said. Officials had brought in an unnamed student for a welfare check when the student suddenly pulled out a gun and opened fire, KCBD reported.

The university did not immediately confirm any deaths or injuries from the shooting.The suspect was described as 6 feet tall and 140 pounds with blue eyes and red hair, wearing blue jeans and a white T-shirt, KCBD added.

Lubbock police confirm that a Texas Tech police officer has been shot and killed at Texas Tech Police Headquarters.

It happened around 8 p.m. on Monday night at the Texas Tech Police building at 413 Flint Avenue.

Texas Tech officials tell us they brought a student in for a welfare check, once at the PD building, the student pulled a gun and shot the officer, killing him. Then the student fled.

Police are searching for the student, 19-year-old freshman Hollis A. Daniels.

Police tell us the shooter fled in a vehicle and is still at large as of Monday night. Texas Tech campus is on lockdown, everyone on campus should take shelter in a safe location. UMC is also on lockdown.

The inside of the building has been cleared and a SWAT team is assisting with the search.

Everyone is advised to avoid the area of 4th & Flint.