A family was turned away from a lounge at Manchester Airport for wearing Minnie Mouse t-shirts.

Emma Raikes was with her two-year-old niece, her mum, and five other members of their family when they were told they had to cover up the tops. The incident occurred at a Manchester Airport.

Raikes said that at first, airport security delayed her family’s entrance to the lounge because the booking was made in her mother’s name.

“Nothing was said about our clothes at this time,” Raikes said.

However, when they arrived at the Aspire Lounge, they were knocked back by security staff who felt that their t-shirts were inappropriate. They had been granted access to the lounge on previous trips and Emma’s mum Jane had paid close to £170 to go in the exclusive area before their flight on Monday morning.

Raikes said in a statement:

“We were extremely disappointed at the hassle we faced when trying to enter the lounge we had booked. We are on a family moon to Disney and did not think a Minnie Mouse T-shirt with our name on would be seen as offensive.

“It was a disappointing start to our holiday. I wouldn’t mind but a Minnie Mouse T-shirt with our name on is not offensive in any way. My niece was grumpy and crying as she was hungry.”

“It’s not like we were a stag or hen party” she added.

Swissport, which owns and operates the lounge, apologized and said staff could be re-educated on dress code rules.

Raikes then suggested covering up their Minnie Mouse T-shirts with jumpers and cardigans. The group was granted access afterward.

The airport lounge is operated and owned by Swissport.

A spokesman said: “Our lounges do have a dress code in which we allow guests to wear a myriad of smart casual items and disallow other items such as tour shirts, sportswear, and fancy dress.”

“The fact a man and young boy walked straight in after us wearing Manchester United tops made us feel like it was just us that had been pulled up, which made us feel targeted,” Raikes said.

“This was not sportswear or T-shirts with offensive slogans,” she added.

Swissport issued a statement shortly after the incident occurred, and apologized to the family, saying staff misinterpreted the dress code. 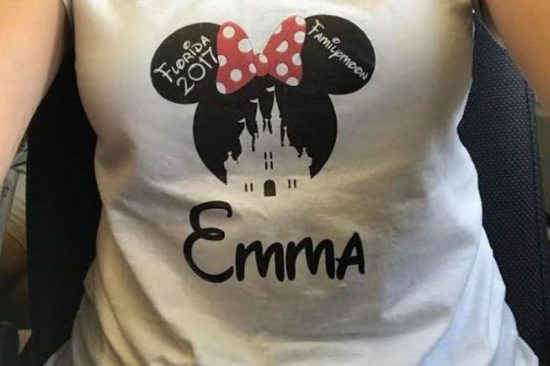 “Our lounges do have a dress code in which we allow guests to wear a myriad of smart casual items and disallow other items such as tour shirts, sportswear and fancy dress,” they said in a statement.

“On this specific occasion, the member of staff who dealt with the family was wrong to have asked them to cover their personalised t-shirts and has misinterpreted the dress code, which is designed to ensure a comfortable atmosphere for all guests within our network of lounges.

“We sincerely apologise to the family for this genuine mistake and would encourage them to contact us directly to resolve this matter. The entire team at Manchester Aspire Lounge will be re-educated on the dress code to ensure this does not happen again.”

But for Raikes, the damage was already done. She expressed her frustration to the Manchester Evening News: “It was a disappointing start to our holiday … My niece was grumpy and crying as she was hungry … We were boiling and the lady on the desk wasn’t even nice about it. We have been in the escape lounge twice before which is lovely and never had any issues.”