Winnipeg police say one man is in custody after a hit-and-run injured four people in front of the Manitoba Legislative Building Friday night.

Police say they received word of the incident near Memorial Boulevard and Broadway at 9:50 p.m. Friday.

“(The Jeep) was moving at a pretty decent clip and it’s pretty miraculous that nobody sustained any serious injuries.”

In a viral video clip below, it appears as though the driver is intentionally ramming into the vehicle in front of it where the pedestrian is also standing. Protesters can be seen running to the person who appears to have been run over by the white vehicle as they help him out of the roadway.

Freedom Convoy protester hit by a car in a hit-and-run last night during the protest in front of Manitoba’s Legislative Building in Winnipeg, Manitoba, Canada. pic.twitter.com/hbN4wBwvX1

A white Jeep strikes several people and speeds off. The source of the video says four people were hospitalized and the driver was later apprehended and arrested by police. 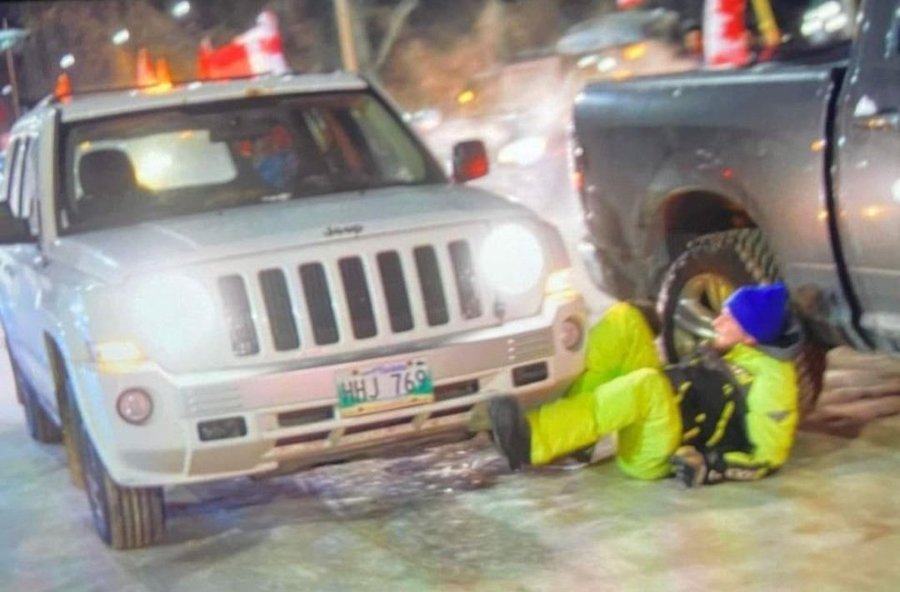 Below is the full statement by Winnepeg Police Constable Rob Carver detailing the hit-and-run targetting #FreedomConvoyCanada2022 protestors at 9:10 PM last night near Broadway and Memorial:

This is the full statement by @wpgpolice Constable Rob Carver detailing the hit-and-run targetting #FreedomConvoyCanada2022 protestors at 9:10 PM last night near Broadway and Memorial. pic.twitter.com/cWmDR1J4fx

A 42-year-old man from Headingley is facing several charges, including assault with a weapon, dangerous operation of a vehicle causing bodily harm, and failing to stop at the scene of an accident.

Carver says the man’s name was not released as charges had not yet been formally laid.